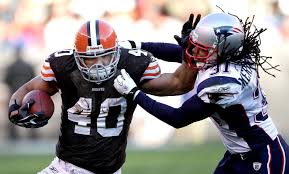 Hillis sits out with hamstring issue: This is how it starts. Cleveland Browns RB Peyton Hillis was removed from practice on Wednesday as a precaution due to a hamstring issue, coach Pat Shurmur said. But for superstitious fantasy owners, the latest “Madden” cover boy may as well have been standing under a ladder and juggling mirrors as a line of black cats paraded by.

Hillis is still the No. 1 running back in Cleveland and that doesn’t figure to change anytime soon. But with Montario Hardesty and Brandon Jackson waiting in the wings to scoop up any extra carries, there is plenty of reason to be concerned that Hillis won’t replicate his 2010 breakout success. Regardless, Hillis (the No. 14 running back on NFL.com’s projections) is still worthy of a being a No. 2 running back in fantasy leagues. Now that the Browns are handling him and his hamstring with tender loving care, you are forgiven if you want to handcuff him to a rabbit’s foot in your draft.