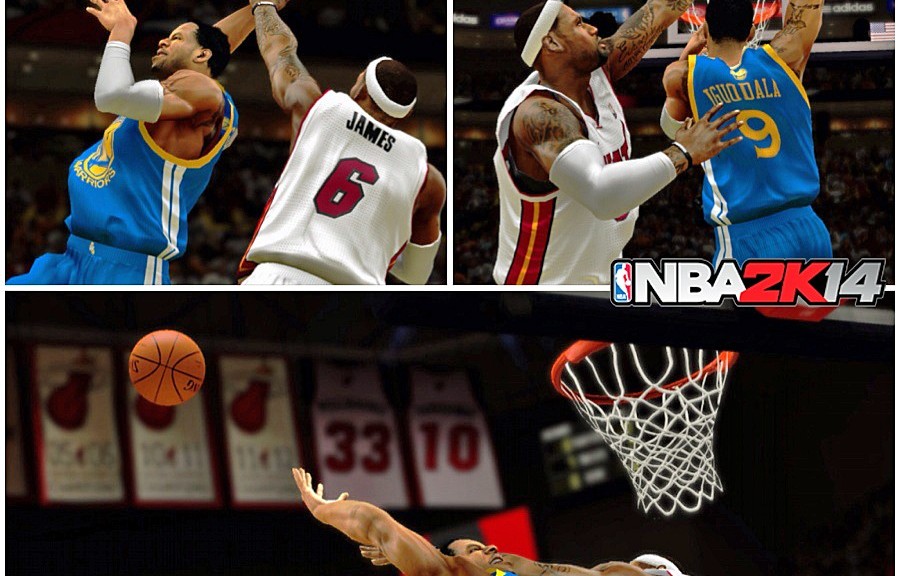 The most noticeable change to this year’s game and probably a real game changer is the new blocking system. Not only do you get to see awesome block animations, the feel and reward of playing defense is much higher than last year. On one possession, I played great defense against Tim Duncan and the San Antonio Spurs until the end of the shot clock, at which point I blocked his shot because he couldn’t get a good one off. You really feel the presence of good shot blockers around the rim this year. Great addition.

Defense on the whole felt a lot stronger as offensive players tend to lose the ball when going into traffic and a lot of contact animations are triggered around the rim. Defense movement seemed improved as well – all in all I really liked playing defense, it was a lot more fun than in last year’s games.

On offense there are some great improvements as well. Passing animations and speed are noticeably improved plus the addition of the stick as a passing trigger felt great too. Shooting is a lot more responsive as well – unfortunately there are still those very quick release points where you don’t have the opportunity to really hang in the air while shooting. Shot releases did feel disconnected again for me which was very disappointing to see.

Another thing I didn’t see a lot of improvements in was the floor spacing. You can tell that they were trying to address the issue (which has plagued the series for years) and the faster passes and jump shots did help a bit – but the main problem with help defense being too one-dimensional and defensive recovery being too quick still exists. Also the teammate AI doesn’t space the floor well enough when penetrating. On one occasion I had Parker of the spurs on Chris Bosh in the post & paint and no Spurs player came to help.

Hope they can fix this issue in the next gen versions. The new Pro Stick needs a little getting used to at first. I had some instances where I wanted to dribble but went up for the shot. Overall I liked this setting more than holding down LT for a shot or drive. There are a couple of nice new dribbling animations as well. There were other positive aspects as well. Biting on pump fakes can cause very realistic looking animations where players fall over each other. Contact animations in the paint seemed more varied but you can´t really tell how good or varied they are from playing only a couple of games. I did see some familiar contact drive animations from 2K13 a little too much. I saw a one handed dunk by Lennard on Haslem which looked almost exactly like the one in he NBA finals against Miller. I had the feeling that dunks were a little bit more explosive as well.  Playing the Euroleague teams feels a little different as a result of different defensive schemes.

Overall I liked the improvements a lot after playing for a while but was disappointed to see some issues I had with the last couple of games still existed (jump shots & spacing). This is the year of the first next gen version of NBA 2K so I can understand that the wheel won´t be reinvented with the last big current gen effort. NBA 2K14 will may very well be the best version of NBA 2K to date – just don´t expect a  very different game.