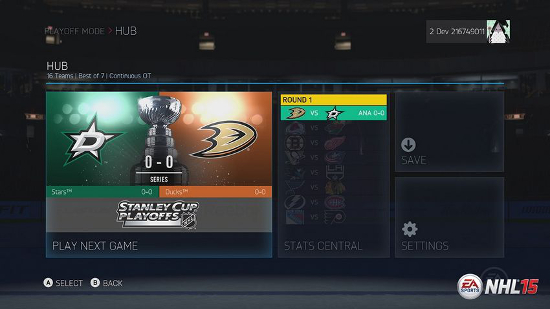 When it was discovered just how much was missing from the Xbox One and PS4 version of NHL 15 EA Sports attempted to soften the blowback by laying out a plan to add in some features in the months ahead. The first of those features have made it in through a patch today.

Playoff Mode
Play an offline bracket tournament with up to 16 teams. Use the teams from the NHL or create your own tournament tree by selecting teams from up to 12 different leagues. Play or simulate each game and track player and team stats throughout the tournament. END_OF_DOCUMENT_TOKEN_TO_BE_REPLACED

Some NHL 12 Online Team Play gameplay of my 1st time playing goalie, with TSG members JERSEY REBEL & Jesmonkey69(me) broken into 2 videos. We just play in the EA Online Team Play lobby & jump into ranked games. WARNING!!! This really is my 1st time attempting to play the GOALIE, I started out pretty good but then…. IT GOT BAD & I REALIZED AT GOALIE I SUCK BAD!!! Please Subscribe for email updates of blog posts, subscribe to our YouTube channel http://youtube.com/jesmonkey69 & follow us on Twitter for your sports & gaming news @thesimgamer. Check out both the gameplay videos below and feel free to comment:

END_OF_DOCUMENT_TOKEN_TO_BE_REPLACED

With the new ones for this season having now all been officially revealed EA Sports has released the alternate jersey code for NHL 12. The code, which is input through the menu of the game, introduces an additional jersey for a handful of teams while a new roster that includes updates to both the NHL and CHL has also arrived.